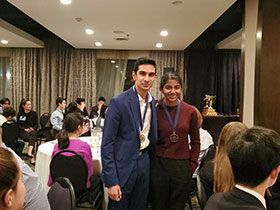 5/21/2020
By Ms. Tracey Lee, Debate and Speech Coach
The 9th annual Canadian Junior High Speech Nationals concluded May 16 and was a resounding success. The tournament welcomed 60 competitors from five provinces, showcasing talented young speakers from across Canada. Competing in speech categories ranging from persuasive speaking, solo acting and interpretive reading to after-dinner speaking, students began submitting their prepared videos through email submission at the start of the week. More than 80 judges from across Canada volunteered at the event; judges included several WPGA alumni, now living in the UK, the United States and throughout Canada.
On May 16, competitors attended the live rounds on Zoom and participated in two rounds of impromptu speaking as well as the finals in all five categories. The overall winner was a talented student from Country Day School in Toronto. Kudos to WPGA entrants Edward Gao ’24 and Chelsea Hu ’23, both of whom qualified for the finals in the after-dinner category. Edward won 3rd place speaker in that category.
Special thanks to Samantha Starkey ’15, co-convenor of this year’s event, and to all WPGA staff who volunteered as judges. A portion of tournament registration fees will be donated to the VGH and UBC Foundation COVID-19 Relief Fund.
FDT Canadian Public Speaking Competition
Last year’s Canadian Junior High Speech Champion, Rafeeq Kassam-Jiwani ‘22, was in the news recently, as he competed in the nationwide FDT Public Speaking Competition for high school students.This event welcomed just under 200 competitors, who wrote and delivered speeches on the topic “The World After Quarantine.” Rafeeq advanced through preliminary rounds to the Grand Finals on May 20, when he won 3rd place overall (including a cash prize of $1,000!).
Click here to watch his award-winning speech.
UBC Spring High School Debate Tournament (Seniors)
Amid the public speaking events, senior debaters have continued to participate in debating tournaments. UBC traditionally hosts a spring tournament for students in early April; this year, the event was postponed to May and split into two weekends. The senior tournament welcomed grades 10-12 debaters to compete in a British Parliamentary style of debate May 15-16. Congratulations to Edison Tan ’21 and Vincent Gao ’22, who won the senior tournament. Edison and Vincent advanced over teammates Ethan Jasny ’21 and Annushka Agarwal ’22 in the Grand Finals.
Our junior teams will be participating in the UBC Spring Junior Debate Tournament May 22-23. Stay tuned for their results!
Back