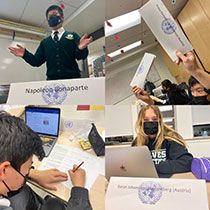 Following the success of VYMUN last month, our Model UN Club held its first "mini" VYMUN on November 24. For three hours after school, 20 delegates debated, argued and voted in a simulation of the Congress Vienna to determine the punishment of Napoleon and the fate of Europe.
Taking on the roles of historical figures including the Tsar of Russia, Duke of Wellington and American President James Madison, grades 8-10 Model UN members also represented dais staff, delegates and directors. Designed to broaden student understanding of global politics and historic events, future events will include the division of Asia after the death of Genghis Khan, current criminal cases before the World Court of Justice, and, in December, the armed invasion of Santa's Village and the decision to deploy the military forces of the United Nations Emergency Force.
Back