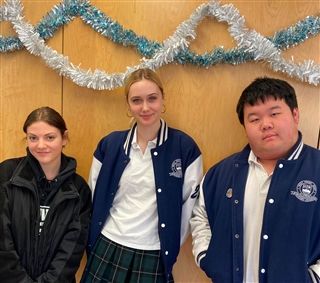 Shrek Behind the Scenes

With less than four months until the WPGA production of Shrek! The Musical debuts onstage at the Norman Rothstein Theatre, our amazing cast has been working tirelessly through each dance number, song and scene. However, something many may not realize is that our production wouldn’t be possible without crew pulling the strings. This includes our stage managers and assistant stage manager for this year: Ava Gunka ‘23 (myself), Edward Wang ‘23, and Juliette Levy-Gay ‘24.
Leading up to Tech Week, stage managers are working to ensure rehearsals go smoothly and expedite communication throughout technical departments (costume, props, hair and makeup). During Tech Week, responsibilities will start to pick up, especially on show nights. Stage managers are essentially the directors backstage, calling cues for lighting, sound, and actors; moving scenes; and overseeing our technical team. It's vital that we're organized and prepared.
We have just as much excitement and pride for the production as the cast. Even though it's a draining job, it's so rewarding to know that all the work we put into our rehearsals (not to mention the 8-10 hour days during Tech Week!) will pay off. The responsibilities are many behind the scenes; after all, a show wouldn’t be the same without costumes, makeup, props, lighting or sounds!
We hope you'll join us March 2-4 for our performances. Ticket details will be released immediately following Winter Break.
Back