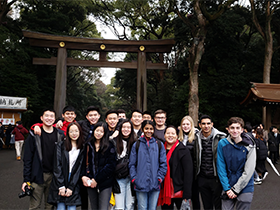 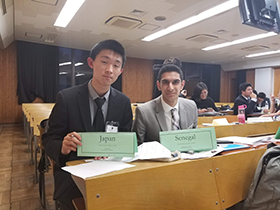 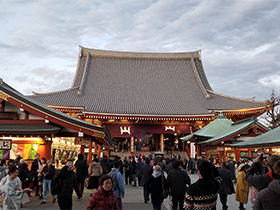 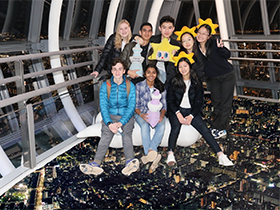 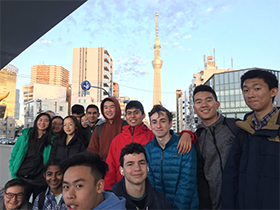 From January 6-14, West Point Grey Academy’s senior Model United Nations team embarked on the journey of a lifetime to Tokyo, Japan. Accompanied by Ms. Lee, Ms. Kerbel and Mr. Thomas, 16 students competed at the Harvard Model Congress Asia at the University of Tokyo. The trip not only brought about incredible victories but also fostered team bonding and cultural immersion. Arriving in Tokyo four days before the competition, the team was able to immerse themselves in the city’s sites and activities. From visiting the shopping areas of Shibuya crossing and Ginza Six to taking in the serenity of the Imperial Palace gardens and the Meiji shrine, we students explored many areas of this beautiful city. Highlights included excursions to Odaiba City and TeamLab, the digital arts museum, and scaling the heights of Tokyo Skytree tower.
The tournament itself took place January 11–13. Our delegates, ranging from grades 10–12, competed on several domestic and international committees. At the conference, our students brokered friendships with delegates from around the world, including Indonesia, India and China. Being the only Canadian delegation, our team represented WPGA and Canada with pride. We worked diligently in our respective committees, simulating different arms of the UN, to resolve pressing global issues ranging from the plight of domestic migrant workers to the opioid crisis and drug trafficking. Although the tournament was extremely tough, with experienced competitors, the Wolves took home several awards! Jeremy Fang ’21, Natassia Wong ’21 and Stephanie Hai ’22 all received honourable mentions in their respective committees. Vincent Gao ’22, Ethan Jasny ’21 and Logan Higgins ’22 were recognized for their diplomatic finesse on their committees, each winning a gavel for best delegate.
The team greatly thanks Ms. Lee for her outstanding trip organization and for all the hours she spent coaching the team in preparation for Harvard Model Congress Asia. Lastly, I encourage all students to consider attending an international Model UN such as Harvard Model Congress, because the memories made, experience gained, and sights seen are truly priceless!
Back