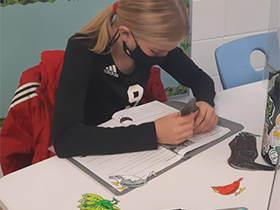 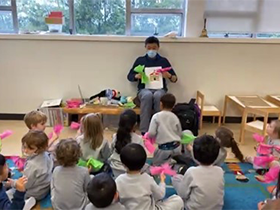 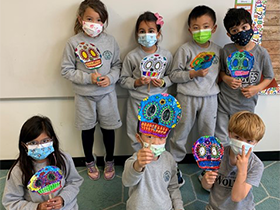 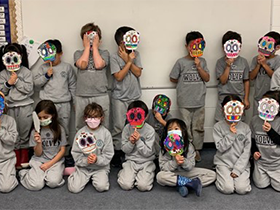 Since September, languages in the Junior School has been thriving—in the classroom and in the tent! We are grateful for the ongoing support of vibrant languages curriculum delivery. In Term 1, here is what we have been working on:

Intermediate French:
In French 7, we have been exploring the First Nations’ folk story Why the Raven and the Crow are the Same Colour. Additionally, we continue to use Padlet, a digital platform, to help students track their weekly practice to help meet their goals. In French 5 and 6, students are well into the AIM stories Louis the Frog and Do you want to go to Carnaval? They have also been focusing on reviewing colours, days of the week, months of the year, and writing the date correctly in French. They have been learning how to describe pictures accurately using prepositions and the expression “il y a” (there is/there are). Students have also become much more familiar with the concept of masculine and feminine nouns, and the way that the spelling of colours changes when describing a masculine or feminine noun. The focus continues to be acquiring new vocabulary through AIM and using the target language in class as much as possible.

In French 4, students began the year by learning about the Métis people, doing a group research project on a contemporary and influential Métis person. They have started their study of the AIM story The Three Little Pigs.

Intermediate Spanish:
In Spanish 7, we are reading the novel Esperanza, which follows the true story of a family fleeing Guatemala during the Civil War. In Spanish 6, we are following the exciting adventures of Llama, Guinea Pig and Monkey as they escape from the zoo and explore the city of Lima in our novel Llama en Lima. In both grades, Padlet is used to track weekly practice.

In Spanish 5, students have been learning about the Mexican celebration El Día de los Muertos through a story about a family celebrating the memory of their grandma. The focus continues to be acquiring new vocabulary through AIM and using the target language in class as much as possible. Grade 4 Spanish continues to work on using high-frequency vocabulary through games, movement, raps and written activities. Student participation, as always, is key to making progress and gaining confidence in language skills.

Intermediate Mandarin:
In Mandarin 7, we have been learning about Chinese Pinyin, Introduction and Chinese cultural celebration of Moon Festival. We have also started to learn the AIM story ”Wǒ zěnme qù nàlǐ? 我怎么去那里？(How do I get there?). Students are demonstrating their written skills by writing three or more sentences in Pinyin about each character in the story and recording it on Padlet. In Mandarin 6, we have also been learning about Chinese Pinyin, Introduction and Moon Festival, and have started to learn the AIM story “小猫和月亮 xiǎo māo hé yuè liang (Cat and the Moon). The focus continues to be acquiring new vocabulary through AIM and using the target language in class as much as possible.

In Mandarin 4 and 5, students began the year by learning about the Mid-Autumn Festival. Since then, they have been learning and reviewing Pinyin to improve their pronunciation, reading and writing skills. Students are continuing to build their vocabulary and expressing their ideas orally.

Primary Languages: In Spanish, French and Mandarin, we have been working on speaking only the target language in the classroom, and are building vocabulary for our class stories and skits. Thank you to the many grades 2/3 families who downloaded the Quizlet app. This is an excellent tool to practice vocabulary both in the classroom and at home.

Upcoming: Our department is working on building short videos about how to support your student in languages, such as using the AIM Portal, Quizlet and Padlet. Stay tuned for more resources!
Back