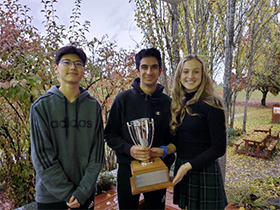 Although public speaking is the smallest branch of our competitive debate and Model UN team, this year our students have managed to excel in the two major competitions of the season. Beginning with the International Independent Schools Public Speaking Competition (IISPSC) in late October, our students outshone the competition. This annual event is a Canadian and American competition and is open to the league's member schools from across the globe. All independent schools from any country are welcome to join the league and participate; this year’s tournament welcomed students worldwide in an online format, introduced this year.

Zara Smith '22 won top performer in the dramatic monologues category. Her teammates, Rafeeq Kassam-Jiwani '22 and Eric Li '23 both qualified for finals in interpretive reading. After a full week of competition, Rafeeq emerged top Canadian speaker and winner of the Montreal Cup, which qualified him for the Canadian national team. As part of the national team, Rafeeq will attend the Worlds Individuals Speech and Debate Championships. For the first time in our school’s history at this event, WPGA also won the award for Top Canadian School Team and the CSDF trophy.

In November, our IISPSC team was joined by Vincent Gao '22, Arman Kassam '23, Ankita Biswas '23 and Michelle Lin '23 at the BC Senior Provincial Speech Championships hosted by Mulgrave School. This event combined asynchronous and synchronous rounds of competition in a variety of speech categories. The result was a Wolves clean sweep of the top speaker awards, with Zara placing 4th overall, Eric 3rd overall, Vincent 2nd overall, and Rafeeq 1st overall. All four speakers will represent WPGA at the Canadian Senior Nationals tournament in February.
Back