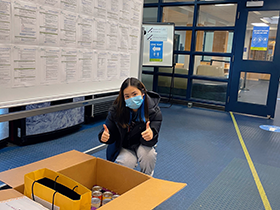 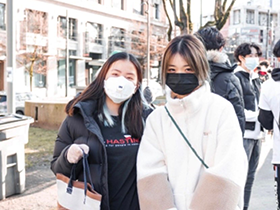 I remember driving by the Downtown Eastside and seeing the large homeless population. Why hasn't the government done anything about the homeless crisis? Why is it these people have to live on the streets and rely on strangers' nickels and dimes? I decided to join Project Hastings when I learned about the visions and goals of this project. If we can't provide proper housing for these people, the least we can do is provide necessities such as clothes, food and water. After seeing the multiple sandwich handouts on Instagram, I decided to join the student-led organization, collaborating with other passionate youths who strive to try their best to help our community.
Thinking back to my first sandwich handout, I was initially terrified to go into the large crowd. However, after seeing my teammates hand out sandwiches and our hungry neighbours accepting the food with happy smiles, I no longer felt scared. Sometimes actions are relatively small, but the changes that they inspire can be extraordinary. I realized that not everyone is a drug addict like the media usually portray them to be; rather, they are people like us. They were put through challenges in life and felt as if they had no other choice. It's simply unfair to discriminate against these people because we never know the life experiences and trauma they have been through.
Not only did I get to know the homeless population and my community better, but I also bonded with my fellow executives and volunteers. During our meetings, we talk about how we can improve the handouts, what other necessities we should consider providing the homeless, and new ideas such as handing out care packages. These events would not be possible without teamwork. Communication between different departments is critical. I learned to better work with others and articulate my ideas.

After several sandwich handouts, I felt a strong need to keep helping. Ever since I was little, I've always been happy giving spare change to the homeless man sitting outside McDonald's. Often giving feels better than receiving because we know our small action made someone's day. Because I know that my small actions, such as providing spare change and handing out sandwiches, can change the lives of many in need, I'm always motivated to help.

At Project Hastings, we combat the food disparity in the Downtown Eastside one meal at a time. Here is a little video showing more. Feel free to connect with me if you wish to lend a hand.
Back