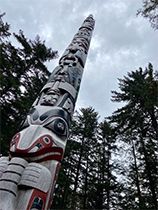 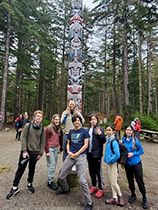 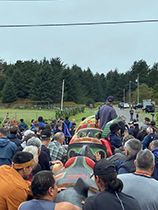 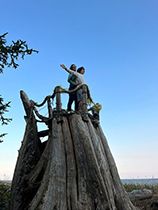 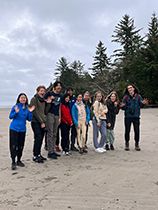 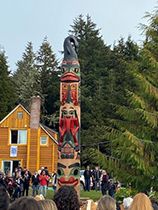 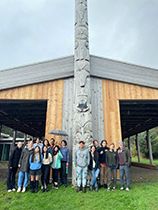 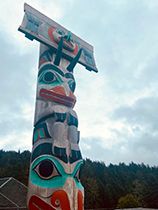 From October 12-17, Mr. McCauley and I accompanied a small group of students to Haida Gwaii, where we attended the memorial pole-raising ceremony and feast for Ben Davidson, who passed away suddenly in 2020. Ben was the son of Robert Davidson, one of Canada’s most respected Haida artists. Robert Davidson is world renowned and is seen as a leader in the revival of Haida art and culture after dark periods in our country’s history like the Potlatch Ban (1884-1951). The Potlatch Ban made it illegal for the Haida and other First Nations to host potlatches or create masks, poles and practice songs or dances. For the Haida and other northern communities, the potlatch is the legal foundation of social structure and ensured that cultural knowledge was indeed transmitted. Robert Davidson was the first to raise a pole after the potlatch ban in Old Massett in 1969.

The pole itself was carved by Robert’s brother, Reg Davidson. Reg’s son, Cecil, was the one who really wanted to have a school group attend the ceremony and bear witness to the events that took place. As a family, the Davidsons are generous with sharing knowledge and what they know because they believe that their sharing of knowledge allows those who are listening or witnessing to gain new insights and understandings, which ultimately leads to growth and respect for the Haida, their culture and Haida Gwaii. As guests, we were invited to learn about Haida people, culture and community.
Our students actively participated in moving the pole, from the carving shed to the location where it was going to be raised the following day. From there, the pole was lifted and pulled to its resting spot in preparation for the raising. The work and preparation did not stop there. After the moving of the pole, students were asked to help with getting the hall decorated and to prepare gift bags that were to be gifted to all the attendees. There were hundreds of gift bags! There was no complaining, just a “how can we help” attitude. The significance of gifting in an important element in feasts and potlatches because being able to gift everyone demonstrates your status and wealth. Rather than showing how much you have, a family or leader shows how truly wealthy they are by how much they can give.
The day of the pole raising was Saturday, October 15, with Mr. Stephen Anthony joining us for the event. In the morning we gathered everyone into one room and watched the documentary about the first pole Robert Davidson raised in 1969. After the film, we spent some time going over protocol and how we as guests would conduct ourselves while demonstrating respect to the community hosting us. In Haida Gwaii, protocols are referred to as the Haida Ways of Being, which include: yahguudang = respect; ad Kyanang tlaagang = to ask first; tll yahda = to make right; and gina ‘waadluxan gud ad kwaagid = everything depends on everything else.
Students got to witness incredible dances, songs and beautiful masks only danced within these types of ceremonies and feasts. One such dance was where eagle down is shaken around the floor from beautiful and sacred head dresses adorned with white ermine furs and sea lion whiskers on the top. The shaking of the eagle down from the top of the head dress throughout the dance blesses the room and the dance floor.

Later in the evening, Cecil called us up to say a few words in front of everyone at the feast. We gifted Salish styled blankets to the Davidsons to show our appreciated and gratitude for allowing us to witness and take part in such a special memorial for Ben.

There was so much we did and experienced on this trip. Highlights include the pole raising and feast but also our lunch and learning with the Elders, Tow Hill Hike and Blowhole visit, Golden Spruce Trail Hike, Pesuta Shipwreck Hike, Balance Rock, a traditional Haida dinner, and a tour with James Williams in Skidegate, who shared so much knowledge and history with us.
In reflecting on the day of the pole raising and the feast that followed, I must say that the students blew me away with their engagement, demonstration of respect, and maturity. To recap our experience in Haida Gwaii is to share with all of you the important learnings and teachings gifted to us by such an amazing, thoughtful community along with a few photos that capture the beauty and significance of the Haida culture.
hay čxʷ q̓ə si:y̓ém̓
Back